The surprising benefits of black cumin oil: An...

The Antimicrobial Effects of Carbon 60: 10 Ways...

The Antioxidant Properties of Carbon 60: 6 Ways...

What is an antioxidant ?

«Antioxidant» is a word that you have seen a lot. Stroll the aisle of a large food surface and you will see it everywhere on the packaging. Finally, there is a high probability that your favorite health drink or fruit juice also refers to this word.

There are also many dietary supplements, such as liposomal vitamin C, spirulina, selenium, glutathione, which contain antioxidants. But when you start to tell how far this term is everywhere, you ask yourself, «What is an antioxidant? Is another fad for well-being or are antioxidants really beneficial ?»

Read on to learn what an antioxidant is and how adding it to your diet can support your health.

What is an antioxidant?

An antioxidant is a molecule found in foods that prevents damage to cells by free radicals. An antioxidant can be created by the bodies of animals and humans. It is found naturally in many foods such as green vegetables, broccoli, spinach, cabbage, garlic, and fruits like, goji berry, blueberries, blackcurrant, grapes, raspberries, kiwi, guava .

Even your daily cup of coffee, cocoa (dark chocolate), or green tea contain antioxidants. Antioxidants can also take the form of necessary vitamins such as vitamin A, vitamin C and vitamin E. Minerals and trace elements such as zinc, magnesium, copper, manganese, potassium, stimulate the immune system, fighting against stress, inflammatory conditions and cellular aging. In addition to these vitamins, olive oil has several antioxidant properties and beneficial effects on your health.

When olive oil is mixed with carbon 60, its antioxidant characteristics become 172 times more efficient than those of vitamin C !

On a positive note, the word antioxidant does not always apply to useful food products. In the 19th and 20th centuries, the term was originally used to describe any chemical that prohibits oxidation. Oxidation is the process by which oxygen binds to another chemical. If you have previously seen a slice of apple brown or rust on metal, it is oxidation. Just as you would like to prohibit the oxidation of the metal so that it does not rust, you want to prohibit the oxidation of your cells to prevent their degradation.

Oxidative stress is the result of too much oxidation. This stress causes feelings of exhaustion, wrinkles on the skin and other indicators of aging. If you do not keep oxidative stress under control, your body is more vulnerable to diseases such as cancer. AMD or macular degeneration, as well as cataracts, can be enhanced by antioxidants, which stimulate mitochondria and thus cell activity.

Other uses of antioxidants

During this period, an antioxidant was essentially used to stop the corrosion of the metal and consolidate the rubber by vulcanization. But as scientific groups analyzed antioxidants, the term became the stop of damage to animal and human cells. Antioxidants have also begun to be used in other sectors such as food and cosmetics. Vitamin E is very often used for the preservation of beauty creams and cosmetics.

Before the use of antioxidants, the biggest way to save plant-based foods and other perishable items was often to store them in a well-sealed, dry, and dark place. Yet this has resulted in less tasty foods. But with the introduction of antioxidants to prevent oxidation, it was now possible to keep food without losing their flavor and taste.

Why all this hype ?

Okay, maybe you think now: "It sounds fantastic, but why is there antioxidant in every health food? Are antioxidants the next thing to go? "An antioxidant can really do a lot for your health and fight diseases. In what way ? Well, it's because of those pesky little things called free radicals.

In order to understand the free radicals, let's first look at the constitution of an atom. Whenever you observe an image of an atom, you notice layers of circles circling the center. These hula-hoop-like layers are called shells. When a shell is filled with electrons, another shell is formed. If an atom with an unfinished outer layer does not contain enough electrons, it is unstable and looks for something to tie with. It's a free radical.

It is necessary to notice that free radicals are not all bad. They can be exploited in the body to fight against pathologies. But if the body has too many free radicals, they can trigger a chain reaction that can develop cell damage and the evolution of several diseases. This is where antioxidants come in.

An antioxidant can give unstable molecules the electrons they need without becoming unstable themselves! With enough antioxidants, you are ready to fight against pathologies such as diabetes and reduce the sensations of aging. 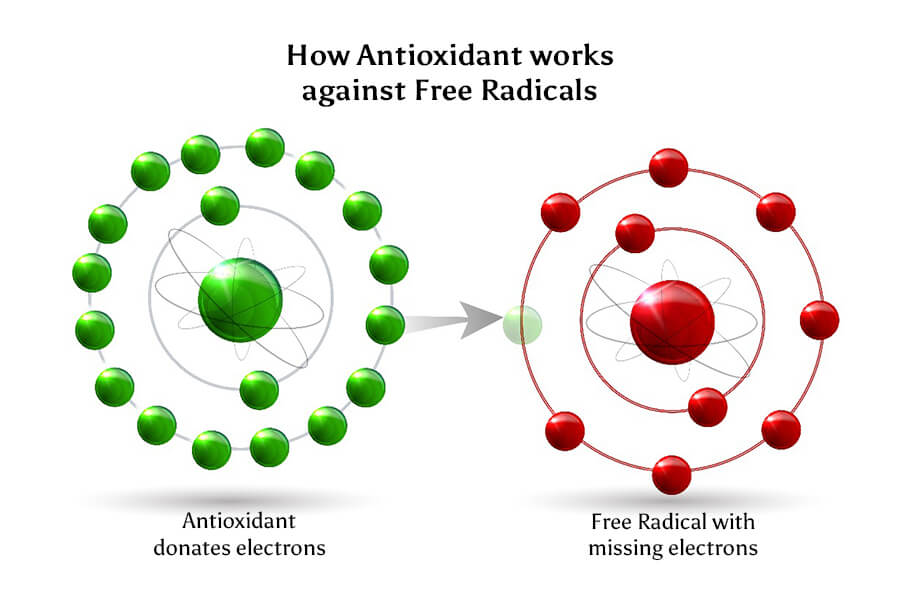 What is the best antioxidant?

The best known antioxidant at the moment is carbon 60. Each molecule can give 180 electrons. By comparison vitamin C which is one of the most powerful antioxidant, gives 2 electrons. The C60 allows you to completely scale up, much faster. But vitamin C also has a lot of assets, for its anti-cancer properties for example.

The body can build its own antioxidants, but a healthy diet of foods rich in antioxidants is one of the best ways to maximize your antioxidant level. Fruits and vegetables are a great way to get the antioxidants you need. Suppose you want to add a little taco to your dinner menu. Instead of just adding a touch of pepper color to the mix, try to insert two or more. Or on Friday night, the day before the weekend, you are looking for a nice roast to start the weekend. Add diverse vegetables to the roast, such as carrots, red onion and green or yellow squash to boost your antioxidant intake.

« What if I do not like meat? » If you want to reduce your portion of meat or if you want to omit it completely, you are free to only heat the vegetables with a little olive oil and a pinch of your favorite seasonings for dinner, it is a another tasty way to stay in shape.

You can do it for dessert by tasting berry pies or making a bowl of your favorite fruit. The goal is to introduce all the colors of the rainbow into your diet.

C60 France oils are here to give you a quick boost, for a better life, healthier.

€97.50
Preparation of hemp oil enriched in carbon 60
Add to cart
Leave a Comment
Leave a Reply